There are a variety of races on Aquatica, most are native to this world but others are either magical evolutions/mutations, transplants or invaders. The two main invaders are the Atlanteans and the Astral Elves. There are also many transplants from other dimensions, such as the Fey.

Dragons: as per the Bestiary
Drakonman

All types of elementals and elemental kin are included here. 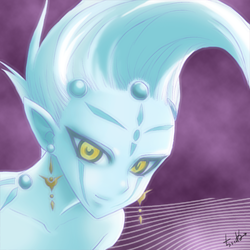 Astral Elves
Are another transplant to the world, but instead of conquering it as their cousins the Atlanteans did, when they arrived through a Dimensional Portal, they became one with Aquatica's Spirit. They are true protectors of the Natural World, nurturing and healing Ley Lines, Nodes and her creatures.  A war between the Elves and Atlanteans, long ago created the defiled wastelands on this World. Creatures and plants inside were mutated, some beyond recognition and altered parts of the world for centuries to come. The Elves have made it their purpose to heal these scars that they helped cause. Elves are Preservers, where most Atlanteans are Defilers.
In their home Dimension, they had advanced/evolved so far that they left their bodies behind and became bored with a society of spiritual intellectuals so they searched for a new home where they could live. They found a young world--Aquatica, and discovered when they arrived that she was a living planet. They became her self-appointed caretakers.
Because of their connection to Aquatica they have no restriction on learning elemental mancy (bending), they also can learn them together at need. Once they learn one version of a spell, other variations aren't needed.
Psionics are easy for them to master.

Wood Elves
Are the standard elves in the PHB

Wild Elves
This sub-race of elf is small like halflings and similar to the elves in the Elfquest book series.

This includes all Fey in the Pathfinder Bestiary.  As well as my homebrew races below.